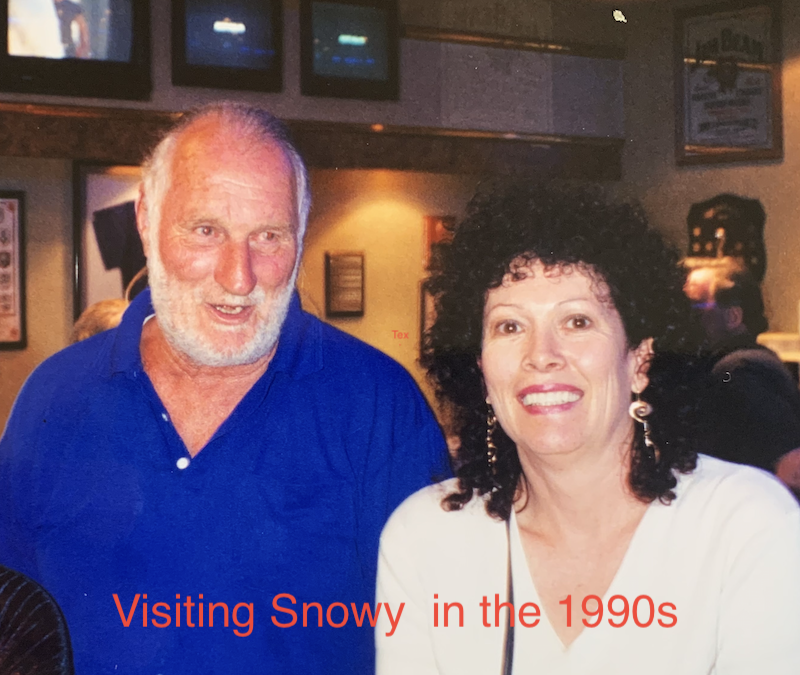 Just recently, someone asked me why I am writing about evil. Actually, my latest book, Lost Souls, Wise Souls: How Challenging Past Lives Shape Our Future, is not really about evil. This book looks at the journey to enlightenment that we take through many lifetimes, but it also explores how and why some people behave poorly—sometimes with great cruelty.

I wondered why I felt compelled to understand human behaviour. I realised that my curiosity arose from my experiences during my younger years. There have been many, but one in particular stands out. It influenced the path I took in life, not only because of what happened, but also because of the nature of the person who played a leading role.

After leaving a violent marriage at the age of twenty, I moved from Queensland to Sydney. After a few months working and meeting people, I found myself living with an underworld figure, nicknamed Snowy. Despite his dangerous reputation, I felt safe living with Snowy. My ex had threatened to kill me but I knew he wouldn’t take on the Sydney underworld.

Snowy and I lived in Gladesville, within walking distance of Lennie’s house. According to newspaper reports and a Royal Commission, Lennie was Mr Big, the head of the Sydney Underworld. I didn’t know what Lennie and Snowy were up to, but since then I have learned a lot more from reports, books, and the Underbelly television series. Many people would describe them as evil.

After I’d been living with Snowy for a couple of years, Lennie decided to take both of us on a vacation through Asia with his family. We spent a few days each in Singapore and Kuala Lumpur before landing in Penang. Lennie’s wife, adult daughter, two young sons and I were left in a luxury hotel while Lennie and Snowy took a side trip. Snowy explained that Lennie, who I knew was a womanizer, wanted to visit Chiang Mai. Apparently, this Thai town was renowned for its beautiful women. I was unimpressed to say the least. Snowy assured me he was not interested in the women. During our time together he’d given me no reason to doubt him. Just the same I was furious with Lennie for potentially leading my partner astray.

At dinner that evening with his wife and children, I found myself saying, “I don’t know why they’ve gone to Chiang Mai. There is nothing there but brothels.”

Until they returned two days later, I was sick. I stayed in my room and ordered a jug of freshly-squeezed orange juice. Apparently orange juice in Asia at that time was scare.

In the cab to the airport, Lennie, who paid for everything, was going through the hotel charges.

“Who the hell ordered the orange juice?” he shouted.

In today’s money that jug of orange juice cost over $100. “I had a sore throat,” I replied quietly. He turned around from the front seat and glared at me. An expletive left his lips.

As it turned out, the orange juice was soon forgotten—once his daughter told him what I’d said in front of his wife.

Soon after we landed in Hong Kong, Lennie confronted me.

“You said this deliberately,” he said. “You wanted to make trouble for me.”

“No. Not at all,” I insisted. “It was just an innocent comment.” At the time, I really believed what I said. In my view, I had no intention of discrediting him. I was just making conversation.

He kept at me. I refused to agree with him, completely convinced of my innocence. Lennie would not let it go. He continued arguing in with me in Hong Kong, then Tokyo and constantly in Manila for the week or two we were there. At every opportunity, he badgered me. One night, I even heard someone say, “There’s Lennie and Karen arguing again.

Back in Sydney, he still persisted every time we met, asserting that I had wanted to cause him trouble. Finally, at the opening of an illegal casino in Liverpool, he made a suggestion: “Just assume I am right for a few minutes.”

I was getting tired of him hassling me. That night, after I got home, I acted on his suggestion. I put myself back in Penang at dinner and imagined I wanted to make life hard for him.

That was all it took. I realised that for months I had been dishonest with Lennie and more importantly, dishonest with myself. Of course I had wanted to punish him. I had been so furious, I’d even made myself sick.

I called Lennie and apologised. He seemed perfectly satisfied.

This was a turning point for me. Up until that moment, I had no idea how easily we could deceive ourselves and how doggedly we could justify our stance. I had argued with Lennie for months, defending a position without a scrap of merit.

Given his power at the time, there were many ways Lennie could have handled my audacity. I was grateful he had persisted. He helped wake me up. I started asking questions about human nature. How had I done that? How had I been so blind to the truth? A year or so later, I went back to school, got into university, and studied psychology.

There is postscript to my story: The naivety I had demonstrated when I was twenty-one was not conquered easily. It was decades before I wised up to another aspect of this story. Lennie had said many times that he hated drugs, didn’t use them, and would not deal in them. I knew he didn’t use drugs, so I believed him. Only recently, when I looked at the distance between Penang and Chiang Mai (nearly 2000 km), did I doubt Snowy’s story about going to Chiang Mai for the beautiful women. At that time, beautiful, classy women were available in every city in Asia. And Chiang Mai is in the middle of the Thai area of the Golden Triangle.

Karen’s latest book is now available for preorder and will be released on the 8th of February 2022.