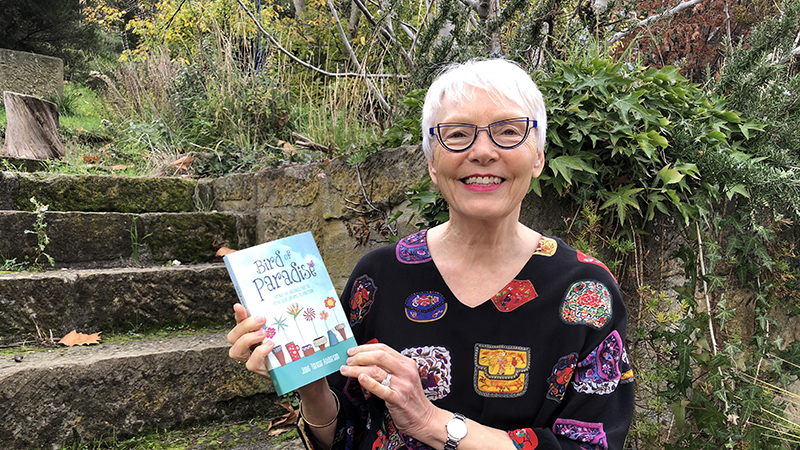 Bird of Paradise can mean different things as my friend and colleague, Jane Teresa Anderson, points out in her recently published book, Bird of Paradise: Taming the Unconscious to bring Your Dreams to Fruition. See photo above.

I first met Jane in 2009 at a talk she was giving on dreams. There was something about her that I found compelling. Maybe it was her silky blonde hair that would glide and shine as she moved her head. Perhaps it was her gentle English accent and softly spoken voice that still somehow carried to the far corners of the room. More likely it was all these things, as well as her stories which showed how dreams reflect our unacknowledged motivations.

After the talk, I spoke to her briefly when my friend Jen introduced us. Although we never exchanged details, I had a feeling we would see each other sometime in the future.

In early 2010, we met again, this time at a book launch. Both our husbands were present, and they hit it off. Michael and Ian are both writers and, soon after meeting, they became friends as did Jane and I.

In Jane’s new book, which I thoroughly enjoyed, she notes a number of synchronicities occurring during her life. After reading it, I considered some of the synchronicities I have experienced. One that stood out involved Jane. At the time, it was so unexpected that I couldn’t dismiss it – like I often had with other potential synchronicities – as coincidence.

One particular day, a young girl of about 17 came to see me at my psychology practice. She had only one request, she wanted to know the meaning of her dream. Although dreams had been mentioned by other clients as side issues, in seventeen years of practice, no one had ever come to see me for the sole reason of interpreting their dream.

At one point in the dream, the young girl was immersed in water, and there were other complexities that struck me as cryptic. I had no idea what any of it meant. But something else was puzzling. That very evening, for the first time ever, Jane and Michael were coming to stay. Not knowing what else to do, I gathered as much information I could and told my client that a dream analyst was coming for dinner. She booked in for the following day.

Using contextual information which I had gleaned from the client, Jane easily unravelled the dream, told me what further questions to ask and how to make sense of it all. The client was thrilled.

Since then, I have had some of my dreams interpreted by Jane and have read some of her books. So now I know a little more about dream analysis than I did before—but still so little. While listening to Jane’s podcasts where she deciphers people’s dreams, I am amazed at her skill. Like the work I do, it is a calling. She heals people through working with them and their dreams.

When I was doing my life between lives training, Jane agreed to be one of my practice clients. In Bird of Paradise, she mentions doing this regression and only while reading the book, did I learn how much the experience meant to her. I also became aware of many other interesting and wonderful experiences she shares of her life.

I enjoyed her book so much I wanted to share it with you. She takes her readers on a lyrical journey through a floral garden of meaningful anecdotes, dreams and stories. I felt a sense of serenity in her writing which left me smiling by its end. Somehow the world felt safe and calm again. I am curious if others will find something similar and wouldn’t be surprised if they did.

If you are interested in dreams and what they mean or if you would like to read Jane’s beautiful book, here is a link: https://www.janeteresa.com/